Laura Prepon and Ben Foster Are Expecting Their First Child Together

A big congratulations are in order for Laura Prepon and Ben Foster—the couple is expecting their first child together, People reports.

The exciting news comes shortly after the Hollywood pair stepped out for the Creative Coalition's 2017 Spotlight Awards during the Sundance Film Festival last night, where the Orange Is the New Black star was given the Spotlight Initiative Award and bundled up her baby bump in a chic black sweater, cozy matching coat, knit beanie, and dark denim skinnies.

Just a few months ago, the notoriously private duo made their red carpet debut and not-so-subtly announced their engagement all at once when the actress flashed her dazzling ring at the New York City premiere of her film The Girl on the Train. Prepon and Foster have been in a relationship since last summer, but they have known each other for nearly two decades.

Laura Prepon Is Engaged to Ben Foster! Get a Look at Her Stunning Ring

We wish this growing family all the best. Click through to our gallery for more stars who are expecting babies in 2017. 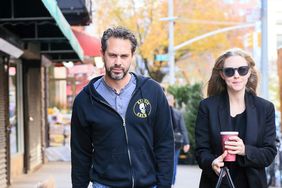