Lady Gaga’s daring costumes and push-the-envelope outfits are getting some official recognition from the fashion industry! Last night, the Council of Fashion Designers of America announced that the pop star will be the recipient of its annual Fashion Icon Award during its annual Fashion Awards ceremony this summer (Iman received the honor last year). As for the other awards, Mary-Kate and Ashley Olsen's label The Row earned a nomination for the Swarovski Award for Womenswear, which honors emerging new talent. Nominees for Womenswear Designer of the Year include Alexander Wang, Proenza Schouler and Marc Jacobs, and Jacobs will also receive the Geoffrey Beene Lifetime Achievement Award. The CFDA will also honor InStyle’s fashion director Hal Rubenstein with the prestigious Eleanor Lambert Founder’s Award, which is given to someone who has made a unique contribution to the world of fashion.

For the full list of nominees, check out the CFDA online. Winners will be announced at the organization's annual gala on June 6th. 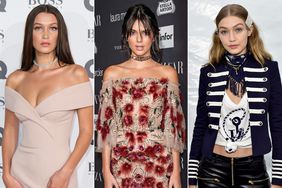