Who wore it best?

While Lady Gaga has been a longtime muse of designer Brandon Maxwell, the 30-year-old star struck a diplomatic chord on Tuesday in a black strapless velvet Maxwell design that felt reminiscent of the all-white custom frock the relative fashion newcomer created for First Lady Michelle Obama’s White House State Dinner on Tuesday.

Gaga’s party-ready version naturally was more risqué, but there’s no denying that each of the leaders in their respective fields gleamed thanks to Maxwell’s talent. So what exactly was the Grammy winner all dressed up for? She slipped into the sexy high-slit piece for Tony Bennett’s 90th birthday party at the Rainbow Room inside the Empire State Building just hours after exiting her apartment in yet another sleek black design.

Gaga rocked a classic, Old Hollywood-inspired bold lip and an equally bold smoky eye and later performed with legend Stevie Wonder while hanging out with Paul McCartney at the event. She took to Instagram to share her enthusiasm for Bennett’s milestone birthday. “I am so honored to be by Tony’s side on his 90th birthday. Today we lit up the Empire State Building together, in the colors of the Italian flag to commemorate Bennett’s legacy as the greatest living legend and example of the Italian American dream,” she wrote. “We love you ‘Ton’ happy birthday! 90 is the new 20!”

The jazz legend also hinted at a follow-up to the duo’s beloved Cheek to Cheek. “She and I are talking about doing a second album,” Bennett reportedly said. 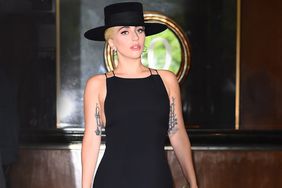