After visiting Peru for a mother-daughter charity trip, Kylie and Kris Jenner on Thursday boarded a plane home in twinning comfort.

The reality star duo visited the South American country for a collaboration with Smile Train, an organization that the youngest Kar-Jenner teamed up with last year on a limited-edition lip kit. The philanthropic group supplies children in developing countries with the resources to undergo cleft surgeries.

After a busy week that included visits with kids at a health clinic in Lima, an encounter with cuddly alpacas and baby goats in Cusco, plus an unfortunate episode of altitude sickness—which the social media mogul documented on Snapchat—the pair were ready to head home from their philanthropic trek in cozy matching looks.

The teen proved that the apple really doesn't fall far from the tree as she donned a comfy black onesie adorned with white stars on her flight—a look mirrored exactly by mom Kris, who also gave the same loungewear a turn as she boarded the private plane.

While the momager displayed hints of her trademark style with oversize sunglasses, a quilted jacket, and black kicks (above), the lip kit queen looked ready to crawl into bed as she accessorized her one piece with a pair of fuzzy white slippers and a stuffed animal (is that a llama or an alpaca?):

The young reality star later shared a Snapchat of herself inside the jet wearing the onesie as the mother-daughter twosome headed international.

Talk about looks that are perfect for and just in time for a Kar-Jenner Mother's Day! 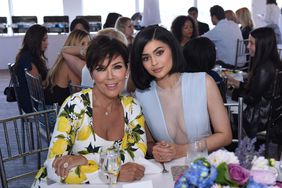 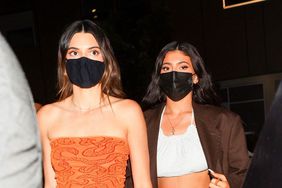 Kendall and Kylie Jenner Stepped Out in Matching Leather Pants 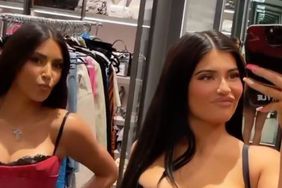