In the photo shot by Eli Russell Linnetz, which the Keeping Up With the Kardashians star posted on Instagram Christmas Day, Kim can be seen lounging in front of a massive Christmas tree with her daughter North cuddling up in her arms and her shirtless son Saint at her side. Pregnant Khloe Kardashian holds Rob Kardashian’s daughter Dream in her lap, Kendall Jenner and Kourtney Kardashian strike a relaxed pose, and Kris Jenner holds Kourtney’s son Reign, while her other two children—Penelope and Mason—race around the room.

Even grandmother Mary Jo Houghton makes an appearance...but Kylie and her baby bump are nowhere in sight.

Kim revealed earlier this month that the Christmas Card would only include women and children (hence why Rob wasn’t in the snaps), but Kylie’s absence from the entire 25 days of Christmas photo series, still came as a shock to fans. “Can someone tell me why Kylie isn’t in here?,” one Instagrammer wrote in Kim’s comments, while many others flooded it, writing, “where is Kylie?”

“Everyone thought kylie would announce her pregnancy on day 25,” another wrote. While it’s not clear why Kylie wasn’t in the snap (and didn’t make that announcement on Christmas day as so many fans hoped), the Lip Kit mogul did pop up on the cover of Love Magazine’s Spring/Summer 2018 issue, which she shared a snap of Monday.

“Merry Christmas! Thank you @thelovemagazine @kegrand for this special cover shot by @kendalljenner & interview by @krisjenner #love19,” she captioned the photo.

For now, it looks like we’ll just have to wait for Kylie’s big announcement. Perhaps that will happen on New Year’s Day? Fingers crossed. 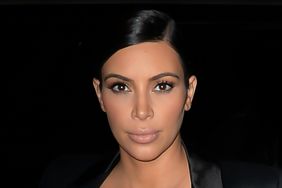 The Kardashian Holiday Card Breaks Tradition and Only Features the Kids