Kylie Jenner and Travis Scott’s one-year-old daughter is already well on her way to being a social media icon of her own. From frequent appearances on her mom's Instagram to landing her very first magazine cover, it’s clear that Stormi is a fashionista-in-training — and her cuteness is taking its effect in the form of serious baby fever. Just ask Kendall Jenner and Hailey Bieber.

It Looks Like Kylie Jenner Is Launching Nail Products and Fragrance

The elder Jenner sister and newly minted Mrs. Bieber both commented on a recent post from the reality star and makeup mogul, and it would seem as though both models are under Stormi's adorable spell. In the photo series posted on July 25, Jenner shared several snaps of the toddler sitting in Scott’s lap, each one cuter than the last.

“Ugh I love this little girl so much,” Jenner captioned the slideshow. “Not only do I think she‘s the cutest thing in the world.. she’s got the sweetest, smartest, most special little soul.”

In addition to the sweet ‘grams, Jenner shared a video of Stormi hugging and kissing her dad, complete with a tiny pat on the back at the end. We’re not crying, you’re crying (JK, we’re definitely crying).

But it would seem as though Hailey Bieber and Kendall Jenner are right there with us. “Please stop giving me the most baby fever 😩,” Bieber commented, adding: “She’s the sweetest.” Jenner chimed in to say: “My baby fever after this is on overload.”

Plenty of other celebs soon flocked to the comments to fawn over baby Stormi. “OMGGGG the cutest!!!” auntie Kim Kardashian commented, while Sofia Richie added: “I can’t with her.”

One thing is for sure: Stormi certainly has a lot of love in her life. And if there happens to be a baby Bieber (or a tiny Jenner) nine months from now, we’ll know exactly why! 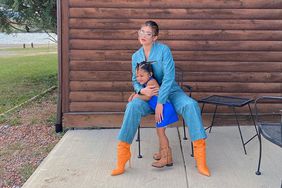