Kristen Stewart went full grunge for the premiere of her highly-anticipated drama flick Certain Women, which made its debut at the Sundance Film Festival Sunday afternoon.

Suited up in a casual all-black ensemble (oversized coat, faded T-shirt and black jeans), paired with banged up black and white Adidas sneakers, K. Stew chatted with reporters about her role as Beth in the film and her much talked about onscreen relationship with Jamie, played by Lily Gladstone.

“[Beth] is very distracted and really sort of isolated and oblivious, which I thought was interesting,” she said before heading inside the screening at Eccles Theater. “Usually you play like the female protagonist and you’re leading the audience through the story very pointedly. In this case, it was like watching two people develop naturally.”

In the film set in picturesque Livingston, Montana, Stewart plays a socially awkward law school grad, who develops a friendship with lonely Native American horse rancher (Gladstone). They first meet after Jamie randomly takes Beth’s class on educational law for teachers at an adult education center and becomes enthralled by her.

“We happened to intersect when we both just kind of need somebody around,” Gladstone told InStyle about the nature of Beth and the rancher’s relationship. “For my character, it’s a long winter spending most of her time with horses and dogs, [so, Beth is] maybe the first person she’s actually looked in the eye for like a month.”

“This woman that she meets just offers a little tiny piece of Jamie that she hears outside of herself, for maybe for the first time. It’s like oh, something about this girl has something about me that I want to know more about,” she continued. “So, I want to get to know this person more. And we’ve all had that. You’re primed for it … so I would say that’s the level of interest, the rest is left to the audience to decide for themselves.”

While it seems like Jamie wants more than a friendship with Beth, she never vocalizes it. Instead, Jamie gives her longing looks, stays silent and their friendship remains platonic.

The development of Beth and Jamie’s relationship is just one of the storylines in the film. Michelle Williams and James LeGros also star as married couple Gina and Ryan Lewis, who are trying to get an old man to sell some of sandstone that’s been piled up in front of his house for ages.

Laura Dern stars in the film as well as an attorney who is not only sleeping with Ryan, but also trying to help a troubled carpenter (Jared Harris) who is having major problems winning his personal injury claim because of a legal issue.

Kelly Reichardt wrote and directed the film, which is based on short stories by Maile Meloy. 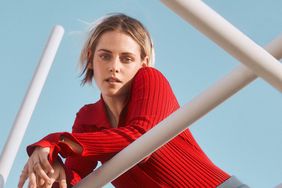