Proving that you can almost be at two places at once, Kim Kardashian West first appeared at the 20th annual Webby Awards in New York City Monday night (she received the first-ever Break the Internet Webby Award) and, as if traveling thousands of miles wasn’t exhausting enough, she arrived in Cannes Tuesday morning rocking an intricately styled all-white look.

The 35-year-old mother of two seems to have traveled in the tailored Vivienne Westwood dress she wore to the awards ceremony, taking to Instagram to showcase her private, uber luxurious airplane duds, plus a shot of her stepping off the plane.

And while the jet-set look is enough to talk about, it’s what she wore once she made her arrival to the seaside European city that speaks to her chameleon-like style. Rocking a dark pair of geometric sunglasses, Kardashian said goodbye to her go-to color of choice, black, and slipped into a silk white dress with pleated detailing paired beneath an off-white, chunky cardigan, and knee-high suede caramel-toned boots.

The getup looks comfortable and is presumably the first of several headline-making fashion moments to come from the Cannes Film Festival. 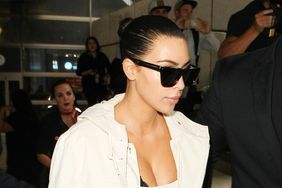 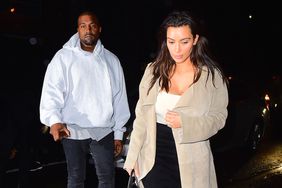