Kim Kardashian Wants You to Stop Talking About Surrogacy Rumors

There have been plenty of rumors swirling about Kim Kardashian and Kanye West's third child, who is being carried by a surrogate. However, the 36-year-old reality TV star and KKW Beauty founder asks that you kindly check yourself, as she and her husband have "never confirmed anything."

Kardashian has been in the Big Apple this week, attending NYFW events with mother Kris Jenner and younger sis Kendall Jenner. At a soirée last night, the Keeping Up With The Kardashians star walked the red carpet in a stunning silver vintage Versace gown, and she took the opportunity to speak to E! about how invasive the public is being regarding her surrogacy.

Bottom line? Don't believe everything you read on the Internet...Until Kim says so, at least. 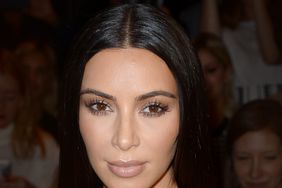