Ahead of Mother’s Day, InStyle explores how women are navigating motherhood in 2018, from the role of the pregnancy selfie to new legislation empowering the working mom.

There is so much people hate about Kim Kardashian, it sometimes seems as though her critics get as much enjoyment out of her as her fans. There is her exhibitionism, her materialism, her ability to build a celebrity persona and multimillion dollar brand without any particular or discernable skill or talent. But if there’s one strand of Kim-hating that seems more potent and persistent than all the rest, it’s the mom-shaming variety, which attached to her the moment she became a mother and seems to only intensify as her children multiply. Of all the ways in which Kardashian offends, this has proven to be the most chronic and acute.

“Cut it out and act like a mother,” she is told on social media. “You should be swooning over your child.” “What will your kids think?” Or simply, “What is wrong with you? You are a mother. Act like one.”

But how should a mother act when she is also a reality television star/sex symbol whose fame is perched upon a sex video, frequent nude selfies posted to social media, and a marriage to Kanye West? What would it mean for a woman whose career is built on a hyper-sexual persona to “act like a mother?” There’s a long history of sexy women reinventing themselves after crossing the threshold into motherhood, their publicists reintroducing their domesticated, damped-down versions to the world. Kim K.’s refusal to do so suggests we might be at a cultural crossroads where moms can be as sexy, as outrageous, as complicated in their self-presentation as anyone else.

While much of celebrity mom-shaming resembles the mom-shaming non-famous moms encounter every day, Kim’s mom-shaming seems to stem not from how she’s parenting her three kids but rather from the simple fact that she’s parenting them. We don’t seem to believe that a woman who looks and behaves as interested in sex as she does could possibly be a good mother. This is a well-trod line of reasoning that tends to follow two different paths. On the one hand, we seem to worry that if a mother is too sexy or too interested in sex, she will surely put her own sexual desires above the needs of her children, leaving them unwashed and unfed while she busies herself making racy videos. This makes perfect sense, as long as you accept the notion that motherhood is an all-consuming pursuit that does and should require 100 percent of a woman’s time and emotional energy, which we do.

This may be a specifically American phenomenon. In Perfect Madness, the American feminist writer Judith Warner contrasts the experience of American mothers to the mothers she befriended while living in France. She writes, “I had friends in France who were full-time, stay-at-home moms with three or four children, but I had never once encountered a woman whose life was overrun by her children’s activities. I had never met a mother, working or otherwise, who didn’t have the ‘time’ to read a book … only an unbalanced person would do something like that. A woman who was, perhaps, fearful of adulthood.”

Unfortunately, this fearfulness of a full and multi-faceted identity, one that can include children, work, a variety of adult relationships, and a thriving sex life, has become not just common but culturally imposed. Mothers today spend more time than ever before focused on their children. As Jennifer Senior describes in All Joy No Fun: The Paradox of Modern Parenthood, the modern mother’s life is crowded with drop-offs and pickups, classes and playdates, birthday parties and piano lessons. Or as historian Paula Fass writes in The End of American Childhood, American mothers today often imagine that having made the choice to become a mother, they are “obligated to do it right,” which often means doing everything. Their mothering work is never done, and so anything they do that’s not mothering (especially something that gives them pleasure), is seen as selfish and self-indulgent. A celebrity mother is particularly vulnerable to such attacks.

The second line of reasoning is a bit more peculiar but equally prevalent. It involves the idea that mothers are their daughters’ primary role models, and therefore, a woman who flaunts her body and her sexuality and seems to enjoy sexual attention will inevitably raise daughters who flaunt their bodies and their sexuality and seem to enjoy sexual attention, or worse, sons who have an awareness that the women who raised them were sexual beings as well as mothers. Those who express this view operate on the assumption that the best example a mom can set for her kids is a sex-negative or sex-neutral one, that a woman who takes pleasure in her own body and her own hotness is inherently problematic. In this view, amother’s job is to protect her daughter from sex and sexuality, not model it for her, and mom-shamers assume that a woman who does otherwise is doing her kids a disservice.

VIDEO: How Much Would it Cost to Get Kim K's Body?

It’s a weird assumption, and one Kim Kardashian refuses to entertain even as she’s subjected to both categories of mom-shaming. Whether critics are attacking her for the way she installs a car seat, or expressing horror when she let North take a nude photograph of her, or posed for a nude selfie shortly after giving birth, she is simultaneously accused of being a terrible influence on her children and also of not influencing them enough because she’s off being sexy. The food she serves them is terrible and the portions are too small, as the old adage goes.

But she’s also unique in that no matter how much mom-shaming she endures, it doesn’t seem to phase or change her. Of all her boundary-pushing, this might be the most profound. In interviews, when asked about the shaming, she’s responded boldly and matter-of-factly that she’s a mom, a business woman, a television star, and a hot woman who loves to show off her body. She doesn’t see any contradiction.

Kim Brooks is the author of Small Animals: Parenthood in the Age of Fear, on shelves Aug. 21. 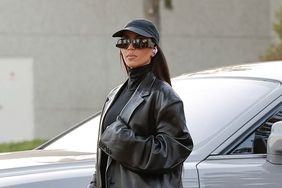