Kim Kardashian West is willing to go to extreme lengths to safeguard against any news leaking about sisters Khloé and Kylie Jenner's pregnancies.

While playing a game of "Spill Your Guts or Fill Your Guts" with James Cordon on Wednesday's The Late Late Show, the KKW Beauty businesswoman was an open book when it came to ranking her family from best to worst dressed (supermodel Kendall Jenner got top honors), as well as dishing on husband, Kanye West's, embarrassing habit of falling asleep in public.

However, the mom of two proved her family loyalty as she stayed mum on the rumors about her two younger sisters's impending bundles of joy at the expense of a particularly disgusting "sardine smoothie."

When the British comedian questioned her about moms-to-be Khloé and Kylie, who are reportedly due around the same time, the reality mogul opted for silence and drank a sardine concoction, which she spit out and pronounced "fu**ing disgusting."

During an episode of The Ellen DeGeneres Show, which aired earlier that day, the star explained that while respect comes into play when staying private about each others's business, there's extra motivation to keep quiet in the Kar-Jenner clan. "This is how we work in the family. When there are lots of rumors, we have these family group chats and we threaten each other's lives if we speak for the other one, so for the safety of my life…," Kardashian revealed to the host. 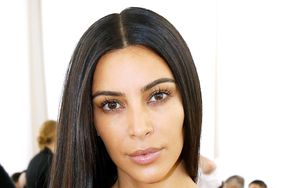 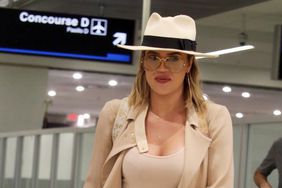 Khloé Kardashian and Her Nude Bodysuit Turn Heads at the Airport 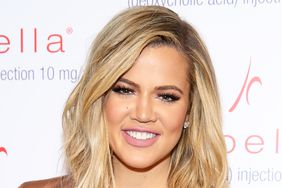 Which Sister Does Khloé Kardashian Enjoy Cheat Day with? It's Not Who You’d Expect