"Stop forcing your young ones to glam up for likes."

When it comes to parenting decisions, Kim Kardashian West can't catch a break.

The KKW Beauty mogul allowed 6-year-old daughter North West to wear makeup as part of a very special occasion during the holidays. Despite the fact that husband Kanye West had previously set a firm no-makeup rule for North earlier this year, North was allowed to wear a very minimal makeup look for the family's Christmas party. Unsurprisingly, people are up in arms about the family's decision.

It began when Kim shared a series of photos on Instagram from Christmas Eve on Thursday, December 26, in which North posed with a soft, shimmery pink suit with a lighter pink mock turtleneck underneath.

With her hair in two top knots and loose bangs to frame her face, North was the picture of holiday glam. The icing on the cake was her light pink lip gloss that appeared to be part of her aunt Kylie Jenner's makeup line, Kylie Cosmetics.

"My poor baby North wasn’t feeling good on a Christmas Eve, she had the stomach flu. You can see she wasn’t feeling well 😢but she wanted to go to go to the party so badly," Kim captioned the photo set. "Saint was ready to rock and was so excited to party. Chicago wanted to see an elf but was afraid of Santa and Psalm is a perfect angel baby."

North West Was Photoshopped into the Kardashian Family Holiday Card

But even though the makeup was decidedly low-key, the mom-shamers came out in full force on Instagram.

"You need to quit letting North at 6 or 7 years old keep wearing Lip Stick!!!!! It is NOT cute anymore!!!" wrote one commenter, saying that "every time North takes a picture these days, she is wearing Lipstick," – which isn't true – but that didn't stop viewers from continuing to sound off.

"why does she look 16 here? stop forcing your young ones to glam up for likes. yuck. let them be kids," one disgruntled follower shared.

"Poor North I’m sure she’s dreaming about looking like the child she is but her mom wants to turn her into a Barbie doll," another Instagram denizen wrote.

Meanwhile, others weren't pleased that little North went to the holiday party with the stomach flu, though Kim noted that she did want to go.

"Ur kid had the stomach flu and STILL had to go to the party???? Jesus," one commenter seethed.

"Your child was sick instead of staying home and taking care of her you dress her up and made her show out for your photos props thats sad," another viewer agreed.

Kim hasn't responded to the commenters at all, which is unsurprising given that she typically says nothing when these types of remarks start coming out. Given that North is currently living under her father's mandate that makeup is off-limits, it's likely we won't be seeing more looks like this from her in the future, so maybe that'll give the mom-shamers a chance to back off. 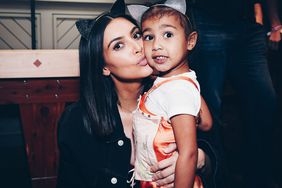