While Kim Kardashian is undoubtedly the social media queen, her husband Kanye West gave the reality star a run for her money this week with his sudden (and rampant) return to Twitter.

Kanye, just being Kanye (you know how it is), spent the last 24 hours sharing cryptic philosophies on life.

One gem of advice in particular caught the mother of West’s three children off guard: “Sometimes you have to get rid of everything.”

Kardashian responded in jest to the tweet, writing, “Wait … EVERYTHING?!?!?!”

Family friend Chrissy Teigen quickly came to Kim’s aid, jokingly volunteering her air mattress in the case that West’s words were to be taken literally.

Kardashian kept up the gag, telling Chrissy that “everything” might just include her kids and her friends, but Teigen’s husband John Legend should really call to clarify.

Once more, Teigen hilariously came to her rescue, telling the E! star she can live in her two-year-old daughter Luna’s bouncy house if all else fails.

As pretty much always, Kim had to follow up her and Chrissy’s exchange with a note to those quick to start drama: “For anyone who has absolutely no humor in their soul please know my tweets are a joke and I will die laughing if I see blogs and media really think I am being serious. So don’t even try it.”

In the wise words of Cardi B, haters best "be careful." 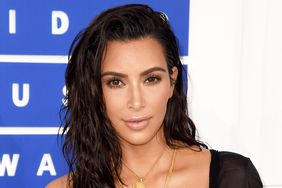