While it's obvious that the 6-year-old and her mom share a lot in common (from their handbag choices to a mutual affinity for cosmetics), a new, childhood photo of the reality star just proved that their similarities run even deeper.

On Saturday, Kim posted a throwback picture of herself and sisters Kourtney and Khloé as kids — all in matching floral ensembles. In the adorable snap, Kim wore her hair curly and smiled confidently at the camera, prompting many fans to do a double take.

"Dude I thought Kim was North!!!!," one user commented. "Is that Kim or North?" questioned a different fan, while another said what was on everyone's mind: "North and Kim are like twins."

Over the years, Kim has tracked the resemblance between herself and her eldest daughter on social media. Back in 2014, the Keeping Up with the Kardashians star shared side-by-side baby photos of the pair on Instagram, captioning the post: "ME/NORTH #MiniMe." Four years later, another photo of Kim as a child (titled "Baby K") had people talking about how North was the spitting image of her.

However, it's her youngest daughter Chicago that Kim believes looks the most like her. Shortly after welcoming her third child, Kardashian discussed their striking resemblance on Ashley Graham's podcast. She explained that Chi "looks like, honestly, my twin," adding that divine intervention is the reason why.

After Kanye West Banned Makeup, This Is What North West Got Into Instead

“I think I was so nervous to have a surrogate and to have that connection that God was like, ‘I’m going to make her look just like you.'" If you ask us, we'd say that she and North are tied. 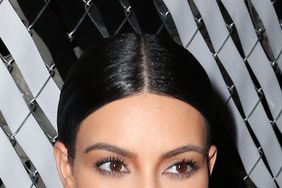