Kim Kardashian West has made her grand entrance at the 2018 Met Gala, and her husband Kanye West is nowhere in sight. Instead, the reality star and beauty mogul came with co-host Donatella Versace as her date for the event, and of course made an entrance in a custom Versace gown.

The mom of three stunned in a skintight gold Versace dress covered in crosses, perfectly fitting the religious theme of the night. She paired the gown with a sleek straight half-up hairstyle and a dramatic smoky eye.

Kardashian West teased the collaboration ahead of time by sharing a no-makeup photo of herself in bed on Monday afternoon, clad in a Versace rose, sleeping mask, and matching slippers. Even the comforter and pillows were covered in the brand’s distinctive designs. “Can you guess who I’m going with this year? Thank you DV for glamming up my room!” she wrote.

West himself decided not to attend after a controversial few weeks, where he expressed his support for Donald Trump, called slavery “a choice,” and presented a Yeezy design sketch that appeared to be ripped off from another brand. The rapper set off a firestorm of critics, so it wouldn’t be surprising if his wife asked him to lay low rather than step out in front of hundreds of flashing cameras and microphones thrust in his face—another potential platform for him to incite controversy. Instead, West is “healing” in the fresh air, and has been spotted in Wyoming.

This isn’t Kardashian’s first time attending the Met Gala solo. While they’ve had many years of coordinating couples outfits, last year she walked the red carpet sans West in a simple white Vivienne Westwood Couture dress. You could say this year’s look was a little less understated. 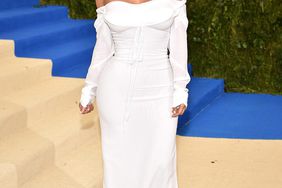