Things have remained relatively silent in the Kardashian camp since Khloé Kardashian's beau Tristan Thompson drew the ire of thousands of Kar-Jenner fans for reportedly cheating on her while she was pregnant. But being quiet is no longer the name of the game–and Khloé, Tristan, and even momager Kris Jenner are starting to speak out, through both actions and words.

Khloé reacted publicly to a critic's tweet about her relationship with Tristan, and she laid down the law for all to see.

"A year from now @khloekardashian will be over all of this and feeling salty for her super passive IG posts. She’s just in the stage of “but I love him!” Until then let her pretend he’s changed and they’ll be a happy family. #WednesdayWisdom," the original commenter Megan wrote.

While this was happening, Tristan was busy preparing for his Thursday night playoffs game with the Cleveland Cavaliers—which he was eventually ejected from, after a fight with Golden State Warriors player Draymond Green. The Cavs ended up losing in overtime, but much of the next-day focus was on Thompson's behavior.

And while that was happening, momager Kris Jenner was spilling the beans on whether or not Khloé would be returning to Los Angeles with baby True, after staying in Cleveland post-birth. The short answer? Yes, she is.

Everything happened in the span of a day, which just proves that keeping up with the Kardashians can really leave you winded. 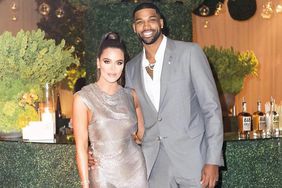