Khloé Kardashian is staying in shape while pregnant with her first child. The Keeping Up with the Kardashians star, who is six months along, shared her workout with her older sister Kourtney Kardashian today on Snapchat, showing off her growing baby bump in a gray sweatshirt.

In the video Snapchats, the expectant mom did several moves to workout her upper body in her home gym. In one Snap she targeted her triceps using an elastic band, and in another she and Kourt put their biceps to the test with fifteen pound weights.

Earlier this week, Kardashian responded to people who criticized her exercise routine. “For the ones who think they are physicians all of a sudden,” Kardashian wrote on Twitter along with a link to a fitpregnancy.com article about the benefits of exercising while pregnant.

“MY doctor and I communicate and my workouts are cleared and highly recommended,” she added. “Thanks kiddos! Don’t make me stop sharing s—.” 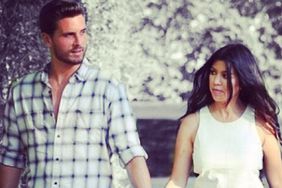