It was a girls' night at the New York City premiere of Austenland! Keri Russell (in Stella McCartney) and director Jerusha Hess, along with Jennifer Coolidge (in Roberto Cavalli) stepped out to celebrate the screening of their romantic comedy hosted by the Cinema Society and Alice + Olivia at the Landmark Sunshine Cinema. Smiling among reporters, Russell admitted finding love is always tricky — be it in Jane Austen's era or today's. "It takes a lot of work to make it happen!" In the film, she plays a Jane Austen aficionado, appropriately named Jane, who takes the ultimate vacation (at the ultimate price — her life savings!) to an English Regency-themed resort in search of her own Darcy, meeting a cast along the way she'll never forget. And the stars themselves will never forget each other. "My favorite thing about it is just I made amazing friends on that movie," Coolidge told InStyle.com. "And they're all here tonight." British costar JJ Feild (in Hugo Boss) agreed. "I'm just excited for everyone to have a laugh, you know, to carry on this great journey, that started with great fun with Jennifer Coolidge and Keri Russell." And that fun continued after the flick: the cast headed to Jimmy at the James Hotel's rooftop, where they mingled poolside against a breezy Manhattan skyline. Guests enjoyed Jane Austen-themed QUI tequila cocktails and light hors d'oeuvres that included sliders, dumplings, shrimp and French fries during the evening's novel end. Austenland hits New York and Los Angeles theaters Friday, August 16.

Plus, see more of this week's star-studded parties and premieres. 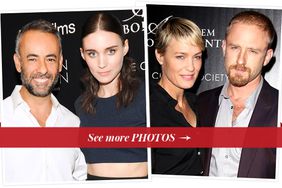