Both Victoria Secret Angels also opted to finish off their casual looks with simple dewy makeup and low ponytails with face-framing pieces.

Meanwhile Kendall's sis Kylie Jenner chose a much more revealing look for the night out. The 18-year-old wore a figure-hugging nude jumpsuit with strategically placed cutouts, pairing the head-turning ensemble with matching nude suede heels, a diamond Rolex watch, and a statement dark lip. She dressed down the look with relaxed waves and a casual jean jacket.

Looks like it was a fun night out, with Kendall taking to Instagram to post fun scenes from inside The Nice Guy in her "party pants." 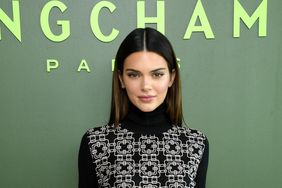