Kendall Jenner Wants a Gun to Protect Herself, but Not All Her Sisters Approve

The Kardashian-Jenner sisters seem so in sync most of the time, from their similar selfie style to their collective love of naked dresses, but like any family, there are moments where they aren't on the same page. And that becomes abundantly clear when the subject of gun ownership comes up.

In a preview clip from Sunday's Keeping Up with the Kardashians, Kendall Jenner sits down with her big sisters Khloé and Kim Kardashian to talk about buying a gun to protect herself while she lives alone, but she doesn't necessarily get total agreement from the two.

"Kendall and I were talking earlier and she just feels really unsafe. She says she has literally a different stalker outside of her house every few days. She's a single girl who lives alone, like someone's already broken into her home, what if she was there?" Khloé explains to Kim.

Despite understanding the safety concern, Kim feels there are other ways of handling it, citing extra security as a workaround, but Khloé brings up Kim's Paris robbery as a counterpoint.

"In your situation, say that gun, you were able to get access to it, would you know what to do?" Khloé asks Kim.

"I would not shoot these, it was three against one, or six, you know, or seven, I didn't know about," Kim says. "There was no way I was gonna get out of there, I'm not like, Laura Croft."

Kendall Jenner Bought an $8.55 Million Estate that Once Belonged to Charlie Sheen

While it's unclear what Kendall ended up deciding, Kim's opinion on it all is crystal clear.

"I'm not comfortable with it," she declares. "I wouldn't want my kids around it. I wouldn't want sleepovers going on here, with the kids here and I know there's a gun."

Watch the clip at top. 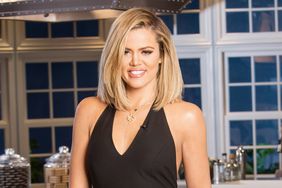