Sometimes, you don't have to say a word to send a powerful message. In the latest video for Rock the Vote and the Independent Journal Review, Kendall Jenner uses fashion instead (combined with pointed captions) to drive home the message that it's more important than ever for millennials to vote.

In the stylish clip, the Keeping Up with the Kardashians star strikes several fierce poses as she's dressed up in fashions from the '70s, '90s and '00s. For her 1970s look, she channels a flower child in a floral crown and flowy, boho maxi dress. For Jenner's 1990s ensemble, she goes grunge, wearing ripped denim jeans and a torn-up green T-shirt, and for her last outfit, to represent the '00s, she crosses her arms in a sleek, navy business suit.

"The 26th Amendment grants 18-year-old's the right to vote," the clip reads. "Young voter turnout rises as candidates appear in new media like MTV. Over 20 million young voters decided the outcome for both elections. What happens next is up to you."

Although she stayed silent in the video, Jenner shared her thoughts about millennials rocking the vote in a statement, saying per E! Online, "Every day we vote, we're able to express our opinions online with 'likes' and hashtags, but it hasn't always been that easy, especially for women."

Alex Skatell, Founder and CEO of Independent Journal Review, chimed in about the importance of having the model in the campaign, saying, "Kendall has a larger social media reach than each of the presidential candidates, and using her voice to encourage millennial voters is a great thing."

Shows Are Back, and So Is Rock Star Fashion
How the Leotard Dress Code of the '80s Set the Stage for Your Yoga Pants 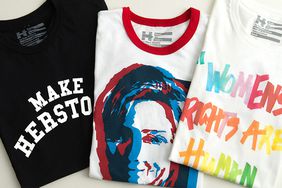