Kelly Rowland was just 18 years old when Destiny’s Child hit the big time in 1999. With the release of their chart-topping sophomore album, The Writing’s on the Wall, Rowland and her three original bandmates — Beyoncé Knowles, LeToya Luckett, and LaTavia Roberson — became overnight stars, the Texas quartet quickly establishing itself as one of the hottest acts of the late nineties and early aughts, complete with TRL appearances, coordinating red carpet ensembles, and world tours.

Of course, along with the spotlight came something beyond the band members’ wildest dreams: wealth. And lots of it.

“I remember so many people telling me that I needed to save my money and invest — but I didn’t listen,” Rowland tells InStyle, laughing. “When I got one of my first paychecks, I went to the grocery store and bought almost everything that my mom used to tell me was too expensive. I bought all of that shit, had a party at my house, and everybody ate up everything. I'll never forget it, because it was fun and it was something I was able to fund myself.”

It wasn’t long before Rowland realized that her income could fund much more than extravagant trips to the grocery store. “I was a millionaire by the age of 20,” she says. “It’s insane when you think about a 20-year-old having all this money and not knowing what the eff do do with it. When it was time for the big purchase, I bought myself a house that was way too big. I was, like, 21 years old with five bedrooms and 5,000 square feet to myself. I was way too young to buy a home like that.”

Yes, Rowland admittedly overdid it at times when it came to enjoying the perks of her newly minted fortune. “I lost my mind—when it came to extra hair, fashion, I had to have everything,” she says. “I remember just going completely nuts on trips to Paris and Italy, blowing like 30 grand in 30 minutes at Bergdorf Goodman. It was ridiculous. Eventually, I started to realize that my AmEx bill was really, really high and I needed to chill out.”

Rowland doesn’t shy away from the subject of paying bills. After all, one of Destiny’s Child’s earliest hits was the unforgettable scrub-shaming anthem, “Bills, Bills, Bills,” which took aim at a man who stopped pulling his financial weight in a relationship. Rowland fondly remembers the moment when the idea for the single was born. “I remember DC being in the studio with [songwriter] Kandi Burruss and [record producer] She’kspere, and the song just came from a conversation that we were having,” says Rowland. “The next thing we know, Kandi sang, ‘Can you pay my bills, can you pay my telephone bills?’ We were like, 'Oh my God, that’s so fly!' So we went into the booth, sang it, and it felt right. We finished writing the song and we had a hit on our hands.”

By 2001, the women of Destiny’s Child (which by then was comprised of Rowland, Knowles, and new band-mate Michelle Williams) were no longer being taken advantage of financially—and they weren’t seeking monetary support from anyone through their lyrics. As their celebrity status reached new heights, their female empowerment message shifted to one of total independence with songs like “Survivor” and “Independent Women,” in which they sang about paying their own way in full.

“As a woman, I think it’s the most empowering thing when you’re actually able to take care of yourself,” says Rowland, who’s maintained a successful solo music career post-Destiny’s Child in addition to appearing on TV shows like The Voice Australia. “In the past, women were made to feel like they could only make things work if they had a man. Now, we’re CEOs and start our own companies. Some of the most successful entrepreneurs right now are women. You can put your hand over your chest with pride because we’ve come such a long way. To be able to take care of yourself and be proud of that is a reward for all the hard work you put in.”

Keep reading for more from Rowland on how the music industry has changed for women over the years, what she’s teaching her 3-year-old son, Titan, about money, and of course, her most expensive bills, bills, bills.

On her financial upbringing…I definitely worried about money. My mother worked as a nanny, so I saw how hard she worked and saved, and it m ade me want to work a lot harder. I wanted my life to be a bit easier, financially.

On her first job… It was a babysitting job, and I got $50 at the end of the night. I wanted to go buy myself this really cute shirt at T.J. Maxx, and I did end up getting it. I don't remember what brand it was, but I know it was cute and I felt like I was poppin’!

On how the success of Destiny’s Child changed her life… I was able to help take better care of my mother. And it's so crazy—maybe I say this now because I'm older and I appreciate stuff a lot more — but being able to afford random doctor’s visits. I could go to any doctor I wanted to! I didn't know what any of the different “-ologists” were before that. Being able to take care of myself and know what was going on with my full body really meant a lot to me. Growing up, I watched my great aunts suffer and scrounge their money together just to go to the doctor. So, to me, medical care was a real luxury.

On teaching her son about of money… Learning about money and saving is important to me as a mom. My son’s dad bought him the coolest piggy bank that's able to tell him exactly how much is inside, so they talk about money. And me and Titan talk about money, too. If he does really, really great in swim class, I'm like, "Oh my god! We're gonna go out and get you a toy." He thinks he's gonna get eight toys, because we used to do that when he was smaller. But now we realize that he's understanding more, and we want him to understand being smart with money. So [he only gets one].

On her most frequent splurges… Well, right now, we're — I can't even say we're, because my husband is just like, "Babe, get what you want” — but we just moved into our new home and I'm kind of cheating on fashion with furniture. We've been having the best time with our interior decorator and she picks out the most beautiful things. And I have expensive taste, so, they aren't cheap.

On her biggest bills… My most expensive bill is usually my AmEx bill, but I don’t even go crazy with those anymore. Honestly, [the charges] all come from a lot of corporate things now like travel. I’m like, “A plane ticket is how much nowadays?!” Looking over your bill gives you perspective.

On her shopping regrets… Spontaneous purchases when you're bored. You're not supposed to be bored and then go shopping. That's just the dumbest thing you could do. Not very smart.

On deciding what business ventures to take on… It has to be something I'm excited about, where I'm thinking about it in my subconscious and literally like, "Ooh, I can't wait.” It just has to be something that gets my brain going, because creativity is the thing that feeds you the most. I have to stay creative, period.

On her most embarrassing money moment… I was running around in workout clothes one day, and my husband called me at the last minute and said, “Babe, let’s go to dinner with some friends.” So I ran into Neiman’s, freshened up at the makeup counter, and then went over to the personal shopping ladies, who always help me pick out stuff that I throw on and wear out of the store. So they fully dressed me in the cutest outfit, and the next thing I knew, I gave them my card to pay and they’re like, "Kelly, the card is acting crazy. It got declined." So I was like, “What?!” I’ve spent hundreds of thousands of dollars with these ladies, but just this one time, my card got declined, and they were like "Wait a minute, wait a minute, we’ve gotta figure this out." They ran it again and again, and we eventually had to call my assistant and get her card information! I guess for that time, I’d already exceeded my limit, because I like to give myself a budget nowadays.

On feeling like the music industry was a total boys’ club at times… When I was younger, you could definitely feel that. But watching different female producers or writers or executives move into play, you just hold them up and support them and thank God that they support you. It should always be reciprocated like that, especially in the music industry because it’s definitely dominated by men. But it’s starting to change, and that’s beautiful to watch.

Priyanka Chopra on That Awkward Time Her Credit Card Got Declined

On advice for women in negotiations… Know your worth. When it comes down to it, if you have a number and you’ve done your research on whatever field that you’re in, and you feel like you’re worth this much, you very much so need to make your worth and your presence known—and then stick by it. Don’t be shy about it, and stand firm and believe it. Stay true to who you are and your gift, and make sure it’s something you’re passionate about because that’s when you’re going to be absolutely amazing at it.

On what she’s learned about money… It doesn’t grow on trees. When I was a kid, I thought money just fell out the sky. That’s not the way it goes; you have to work hard for your money, and now I’m learning with being a mommy that it sometimes requires time away from your kid. That’s the hardest part, when your job actually takes you away from your family. But the most important thing is that you have to put food on the table and keep clothes on their back and shoes on their feet. So I don’t mind working that hard to make sure that the household and the family is great. I’ve also learned that you need to save, but also to invest. And that you shouldn’t go crazy with clothes! Clothes are so trendy, which is why I like to buy stuff that I feel like will be classic, forever pieces. I look at someone like Victoria Beckham, because I feel like she’s going to have everything she wears in her closet forever. 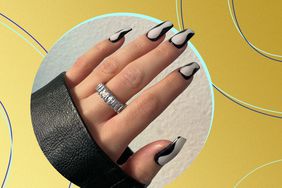