If anyone is wondering exactly who Katy Perry's baby will take after when she arrives just needs to see the photo evidence for an answer to that. In an Instagram post, Perry shared a video clip of her sonogram and instead of oohing and aahing over how cute the blurry image is, the wavy lines very clearly showed the baby giving her the finger. That's much more in line with Perry's Technicolor, in-your-face aesthetic than anything Orlando Bloom's done.

“When your unborn daughter gives you a middle finger from the womb you know you’re in for it #happymothersdaytome,” she captioned the clip. And to toss in another layer of pop culture, she tagged the location as "Middle Fingers Up" just in case anyone missed her baby's message and as a shoutout to Beyoncé, just because.

Fans loved the NSFW moment, telling Perry that the sentiment was just the thing to get them through their day. "Babycat is such a mood," a fan wrote. Another added, "This video was all i needed."

The sonogram is the latest update Perry's given during her pregnancy. Though she's been very visible as she works from home (with appearances on American Idol and The Disney Family Singalong Volume II over the weekend), she's also offered up insight into her pregnant life in quarantine.

She told her Idol co-star Ryan Seacrest that her relationship with Bloom isn't picture-perfect and that it's the imperfection that's creating something beautiful.

"There's a lot of friction between my partner and I, but that friction breeds something beautiful. It can breed a lot of light. It's just one of those relationships," she said. "I don't know about anyone else that’s listening, whatever kind of relationship they’ve had — and I've had many — but it’s like we basically, we get down to the mat and come back up every time." 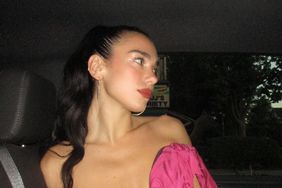 Dua Lipa's Sweetheart Bustier Is the Date-Night Inspiration We Need