In memory of designer Kate Spade, whose death by suicide earlier this month rocked the fashion community and beyond, the company she left behind is supporting suicide prevention and mental health groups with donations totaling over $1 million.

The brand shared the news on social media Wednesday morning, explaining that a donation of $250,000 will be made to the Crisis Text Line, a non-profit organization that offers around-the-clock support for those seeking help.

Additionally, the company will match up to $100,000 for public donations to the Crisis Text Line from June 20 through June 29. You can contribute here. The remaining amount will go toward other similar groups that focus on mental health awareness, though Kate Spade New York did not specifically name those groups.

“Kate Spade was a true fashion icon who brought joy to the lives of women around the world and inspired women to live life to the fullest. We are dedicated to carrying on her legacy,” Kate Spade CEO Anna Bakst told ABC News. “The outpouring of love on social media and in our shops from customers of all ages has been overwhelming and moving … it is such a beautiful reflection of how much Kate was loved.”

VIDEO: Who Is the Late Kate Spade’s Husband and Business Partner, Andy Spade?

The Power of a Kate Spade Bag

Following the deaths of Spade and beloved chef Anthony Bourdain, who was found dead by suicide in France the same week, mental health concerns have been in the spotlight. According to the U.S. Centers for Disease Control and Prevention, suicide is the 10th leading cause of death in the United States. The CDC also recently reports that suicide rates have dramatically increased in the last two decades, with half of the states seeing rates soar by more than 30 percent.

If you or anyone you know needs help, reach out to the National Suicide Prevention Lifeline at 1-800-273-8255 or suicidepreventionlifeline.org. 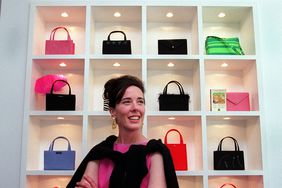