Why Isn't Kate Middleton Wearing a Coat in the Snow?

To say Kate Middleton has a lot of coats may be an understatement. Her collection of cool-weather toppers, from solid and colorful to printed and collarless, is impressive—and how she styles them is unparalleled. She wears them during pregnancy. She wears them in the rain. She wears them over and over again through the years.

But in a snowstorm? Apparently, that's where she draws the line.

Later in the day, following an outfit change, she arrived at the National Portrait Gallery for her second official outing. However, it appeared that she left her coat behind, despite weather that one British newspaper outlet called "the Beast from the East." Apparently, the climate in the U.K is bad enough to be dubbed Storm Emma 2018 with parts of Scotland even issuing a "red alert."

London also saw snow: Just see the snowflake-filled photos of Middleton as she dashed inside the gallery to help unveil the Victorian Giants: The Birth of Art Photography exhibition.

Middleton, who studied photography in college, wrote the foreward for the exhibition, so it's not surprising she made the effort to come out in the snowstorm.

No One Expected Kate Middleton to Get a Tattoo

But her lack of outerwear came as a surprise. The sans-coat Middleton instead wore just a flowy maternity dress with a delicate flower pattern on it. Now she may be a princess of the Elsa variety, but even then, that's got to be pretty cold for her.

Could she have thought that spring sprung a little early? Did she not hear the weather reports? How are her legs not completely frozen, even if she is wearing her mandatory nude tights?

The world may never know. 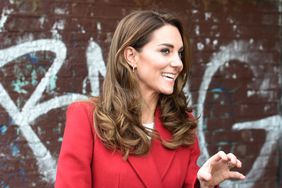