Kate Middleton may not have known Princess Diana, but she chose the perfect ensemble to honor her legacy. The Duchess of Cambridge joined her husband, Prince William, and his brother, Prince Harry, on a visit to Princess Diana's memorial garden on Wednesday to mark the 20th anniversary of her death.

The duchess chose an elegant green Prada tea-length dress ($2,340) with a high neck and long sleeves for a visit to Princess Diana's memorial garden with Princes William and Harry.

Middleton looked elegant in a green Prada tea-length dress with a poppy print, high neck, and long sleeves ($2,340). She accessorized with her signature nude pumps, her engagement ring, and soft curls. Prince William looked casual in a gray blazer and navy slacks, while his brother Harry, fresh off of his trip to Africa with girlfriend Meghan Markle, went for a darker suit.

The duchess's outfit choice gave a subtle nod to Princess Di; poppies are often used in the U.K. to signify remembrance of those who have died. The dress also featured a pussy bow tie at the neckline, a style Diana herself was often photographed wearing.

The trio visited The Sunken Garden, which was transformed into a White Garden dedicated to the princess. White roses, lilies, gladioli, and cosmos have been planted in her honor, creating a "peaceful and contemplative space where visitors can reflect," according to Kensington Palace. Representatives from the many charities that Diana worked for were also present at the commemorative event.

Prince William on Following Princess Diana's Coffin: "It Was Like She Was Walking Beside Us"

Thursday, Aug. 31 marks the 20th anniversary of Princess Diana's tragic death, and we wouldn't be surprised to see even more moving tributes from her two loving sons. 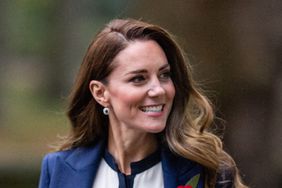 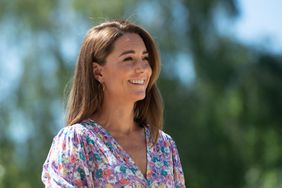