It's not because of the Coronavirus.

The Duke and Duchess of Cambridge are nothing if not creatures of habit (and, uh, royal protocol), but this year has naturally necessitated a few changes to tradition.

Kate Middleton and Prince William’s standing St. Patrick’s Day plans, for example, have been canceled. However, the schedule change was not made due to concerns over the Coronavirus (which has caused cancelations and postponements for Queen Elizabeth, Prince Charles, and Camilla, Duchess of Cornwall).

Instead, Kate and William’s change of plans is due to the absence of the event’s honorees.

Each year, the Cambridges honor the Irish Guards during the annual St. Patrick’s Day parade. The festivities include Kate wearing green, petting an Irish wolfhound named Domhnall, and sipping a pint of Guinness.

Prince Charles Keeps Forgetting Not to Shake Hands With People

This year, however, the Irish Guards are deployed in Iraq and South Sudan, so the event will not be happening. And, given the state of the world right now, a celebration doesn’t quite feel appropriate anyway. Whether or not Kate finds herself out in public on Tuesday, we’re confident she’ll still wear green. 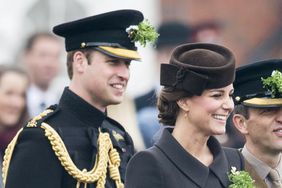 Kate Middleton Brightens Up Her St. Patrick's Day Outfit with a Sprig of Shamrocks