Kate Middleton continues to show off her amazing and sophisticated maternity style on her three-day tour of the U.S. with Prince William. Last night she wore a tweed Tory Burch coat ($595; toryburch.com), black J.Crew skinny jeans, and black pumps to attend the Brooklyn Nets versus Cleveland Cavaliers game. It was a good thing she was dressed to the nines as the royal couple met up with another royal couple (well, Hollywood royalty): Beyoncé (in a Tanya Taylor top and Hervé Léger by Max Azria skirt) and Jay Z. The music power couple greeted the royals between the third and fourth quarters.

But the Duke and Duchess of Cambridge were clearly the stars of the game. While making their way into the Barclays Center, they got a standing ovation and fans took many more pictures of them than the game.

Earlier in the evening, the couple attended the Conservation Reception at the British consul general's residence, where they met Hillary and Chelsea Clinton. And that morning the expectant royal visited Harlem's Northside Center for Child Development (while Prince William was in Washington, D.C., to meet with President Barack Obama at the White House). For that event the duchess wore a beautiful Goat coat as well as suede Stuart Weitzman pumps, tights, gloves, and pearl earrings.

Outerwear has been an important part of Middleton's look on this trip as temperatures have been chilly. Duchess Kate has also been embracing the New York look of wearing darker shades. We can't wait to see what she wears today! 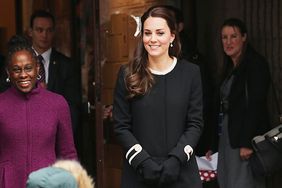 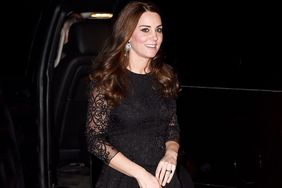 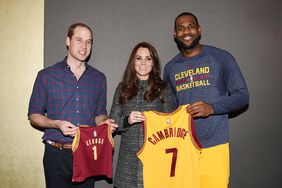