This year's London Marathon participants had an extra special cheering section waiting for them along the 26-mile route. Kate Middleton, Prince William, and Prince Harry all showed up to the 2017 race to encourage the runners, giving out water, hugs, and support to the athletes.

For quite some time, the royal trio have been working with Heads Together to bring awareness to the organization's mental health campaign. Heads Together was chosen as the London Marathon's Charity of the Year, and as such, the Duke and Duchess of Cambridge and Prince Harry decided to come out to support both the runners and the charity!

VIDEO: 14 Times Kate Middleton Was Too Perfect for Words

The royals started off their day at the marathon's starting line, waving to the participants as they began the 26-mile journey.

Once the runners were off, the trio made their way to the Heads Together cheering points along the route, where they passed out water and cheered on the athletes.

When the runners finally crossed the marathon's finish line, Middleton, Prince William, and Prince Harry were there to congratulate them. The Royal family passed out medals and posed for pictures with the weary runners, all while promoting the "Ok To Say" campaign.

This was Middleton's first time watching the London Marathon in person, and it looks like she had an amazing time at the iconic event. 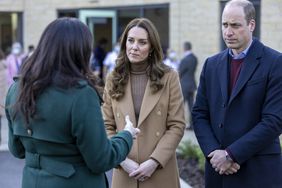