Twitter Is Not Impressed with Karlie Kloss's Met Gala Look

Critics compared her dress to a Twix bar.

This year's Met Gala brought plenty of major fashion moments, thanks to the annual fashion event's broadly-interpreted "Camp" theme. Lady Gaga had four, jaw-dropping wardrobe changes on the pink carpet, while Elle Fanning had literal charms dangling from her nails. So, when Karlie Kloss showed up in what looked like a '80s prom dress, the internet was slightly underwhelmed.

The supermodel wore a gold strapless mini dress with sparkly black puff sleeves that had people comparing her to a human Twix bar. Her beauty look wasn't that out of the ordinary either, with the 26-year-old scraping her blonde locks into a bun and swiping some rosy blush and highlighter on her cheeks.

Not only did Karlie appear uncommitted to the outrageous theme, but she also had people on social media confused by her look in general. Some even called it boring, which is the ultimate insult at the Met Gala.

Ironically, Kloss's honeycomb ensemble almost didn't make it's way down the red carpet. On Twitter, Karlie shared a funny video of herself getting sewn into her outfit after the fabric ripped moments before her debut. "Wouldn’t be the #MetGala without a little getting-sewn-into-my-dress-downstairs action," she captioned the clip.

It seems like the Internet wished Karlie saw the wardrobe malfunction as a sign that she should've went with her back-up option. 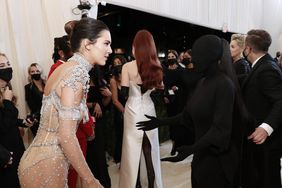 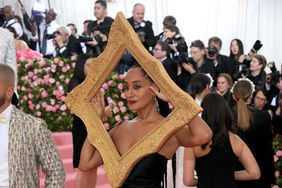