Kanye West Is Going to Release New Music Every Friday, According to Kim Kardashian

Yeezy is back! According to wife Kim Kardashian, Kanye West will release new music from his upcoming album, Swish, every Friday—starting today.

“Friiiiiiday!!!! New Music!!!! #EveryFriday #Swish #RealFriends,” she wrote on Twitter. West’s new music has been a long time coming. The rapper first unveiled an original track, "Only One," on New Year’s Eve 2014, and continued the tradition by dropping the song “Facts” on Dec. 31, 2015.

The album doesn’t yet have a release date, but new music Fridays are certainly enough to hold us over in the meantime. While you wait to see what new track West releases today, check out this clip from his American Idol "audition" to get excited for what the Grammy winner has in store. 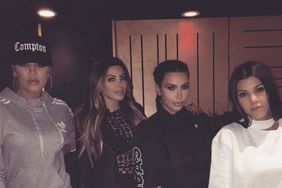 Kim, Kourtney, and Khloé Kardashian Join Kanye West in the Studio
It's Been 10 Years Since Rebecca Black Released "Friday," and the Internet's No Kinder to Young Girls