The Balmain army is back! The French fashion house teased a first look at its upcoming fall 2016 campaign starring two very familiar faces. Rapper Kanye West and model Joan Smalls appear in the first image from the campaign, which was shared on the brand's Instagram account on Monday.

"THE #BALMAINARMY IS BACK Starring #KanyeWest and #JoanSmalls," the caption on the stunning black-and-white photo reads. The shot shows Smalls, dressed in a ruffled crop top and matching wide-legged pants, moving gracefully towards West. Beside her, West appears to be falling to the ground. The husband of devoted Balmain follower Kim Kardashian West, models a crystal-embellished jacket and distressed jeans for the ad. Whether the photo shows the aftermath of Smalls pushing him, or if she's running to help him is unclear.

Balmain creative director Olivier Rousteing shared the same image on his personal Instagram account and offered a bit more information about the inspiration behind the campaign. "MUSIC MEETS FASHION," he wrote alongside the 'gram.

This isn't the first time West has tried his hand at modeling for the brand. He and Kim famously appeared together in the label's spring 2015 campaign.

We look forward to seeing the rest of the shots from the campaign soon! 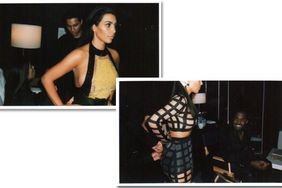