This just in: Justin Trudeau is hilarious, and so is his photographer.

Toronto’s biggest Prince Harry fans were waiting for the royal outside what appeared to be his motorcade at the Invictus Games on Monday. A procession of men in suits was leaving the vicinity, causing bystanders to whip out their phones to document what they were sure to be Harry’s exit.

After a couple men trickled out the door, a suit-clad redheaded man caught the attention of onlookers. “Harry!” they called out—just in time for Canadian Prime Minister Justin Trudeau to point out their folly. The redhead in his procession was not Harry, but rather photographer Adam Scotti, who bears a striking resemblance to the 33-year-old prince.

If Scotti ever tires of being a photographer, perhaps he’d like to try his hand at being a royal body double? 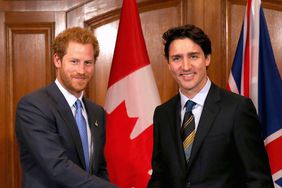