Justin Bieber may not be a newbie when it comes to tattoos, but that still doesn't make his latest ink addition any less shocking.

On Thursday Biebs revealed on Instagram that he's added to his already robust tattoo collection—and the new ink is enormous.

It takes up a large portion of his thigh and says "Better at 70" in black. The singer went on to explain in his Instagram caption that this phrase means a lot to him (we hope so, because it looks permanent).

"I look back at a lot of things in my life, mistakes, insecurities, and although I have felt I've wasted a lot of time it also makes me want to be better faster and longer!" he wrote. "For me personally I want to work every day to be BETTER AT 70."

It's a good message that will probably resonate with his fans just as much as it does with him. A quick scroll through his Instagram comments shows almost nothing but heart eye emojis and words of support and encouragement.

Did Justin Bieber and Bella Hadid Just Have a Sleepover?

With a new tattoo and a positive outlook, we think 2017 is shaping up to be a good solid year for Bieber. 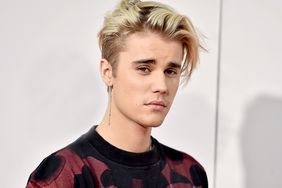