Singer, songwriter, Super Bowl commercial star, and now, ballerina? We all knew he was a versatile performer, but Justin Bieber's latest Instagram posts are too much to handle. In the clips, the pop star shows off his best ballet moves, and to be honest, he's not bad!

Since his return to the 'gram, the Biebs has been entertaining fans with one hilarious post after another—after all, he was absent for six months and had a serious backlog of pictures to share. The 22-year-old "What Do You Mean?" singer is still at it, sharing two silly videos last night of himself practicing his ballet moves.

The clips are dark, but you can make out the blond Bieber, clad in a sweatshirt and T-shirt, launching himself into a spin before attempting a toe touch. Whoever is filming the first video can't help but laugh at the pop star's antics. Bieber captioned his second attempt at the move with, "Ballerina or nAw?"

Bieber's fans will testify that he knows how to bust a move, but these steps are a bit different than his usual performance style. Still, he managed to pull off the jump with flair, and he made us laugh while doing it.

Do we have a new Black Swan on our hands? Probably "Naw," but that's part of the Bieberish charm.

Fergie's Friends Told Her to "Take One for the Team" and Go Out With Josh Duhamel
It's Been 10 Years Since Rebecca Black Released "Friday," and the Internet's No Kinder to Young Girls 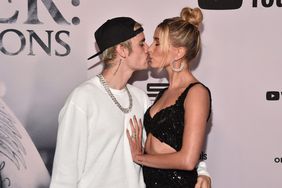