Julia Roberts's Gown from the 1999 Emmys Is '90s Perfection

There was a time when Julia Roberts ruled the big screen with rom-coms (as well as more serious fare, ahem, Erin Brockovich), but back in '99, the superstar was at the Emmy Awards for her work on the small screen. She was nominated for Outstanding Guest Actress in a Drama Series for her role as Katrina Ludlow in an episode of Law & Order, though her outfit (and her date) are probably standing the test of time a little better than the nomination.

Roberts arrived in a long Ralph Lauren dress that seemed simple from the front with an inky black color and a rounded neckline, but when she turned around, things got even better. The back featured a very '90s detail: a delicate lace-up portion that crisscrossed across a low back and was actually part of the dress's halter-style neckline. She kept the rest of her look fairly simple, which may have been a reflection of the decade's more pared-down, pre-Kardashian naked-dress aesthetic. She wore her signature red curls in an updo and kept her makeup just as minimal, with just a soft smoky eye and a subtle pink lip color.

At the time, Roberts was dating fellow actor Benjamin Bratt. They'd started seeing each other in 1997 and even wore "matching friendship rings," according to People. Bratt wore an equally '90s suit, which included a high, three-button stance and boxier, more relaxed fit.

Roberts wouldn't get another Emmy nomination until 2014, when she was up for Outstanding Supporting Actress in a Miniseries or a Movie for her role in The Normal Heart. Though there was talk she'd be nominated in 2019 for her role in Homecoming (not the Beyoncé documentary, the other show), she was ultimately snubbed — though she took it all in stride.

And while Roberts has given us plenty of red carpet memories (that iconic Valentino dress at the 2001 Oscars, the Yves St. Laurent tuxedo at the 2006 Critics' Choice Awards, and the Pretty Woman-inspired gown she wore to the premiere of Money Monster come to mind), few of them hit all the notes of a perfect nostalgia moment quite like this sleek and simple black stunner. 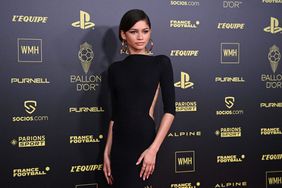 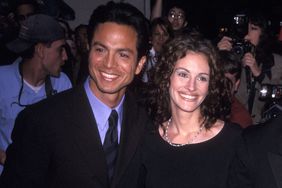