New mom Jessica Biel is celebrating her 34th birthday today! The former 7th Heaven star-turned-Mrs. Timberlake is ringing in her new year on a high note—in fact, Biel's year is only going getting better from here on out.

First, she and Justin Timberlake are gearing up for their son, Silas Randall's first birthday come April; her new family-friendly restaurant Au Fudge just opened; she's set to celebrate the slated release of her new film, The Devil and the Deep Blue Sea—due out sometime this year—and of course, being the apple of her husband-of-three-years' eye.

Just last year, Justin was inducted in the Memphis Hall of Fame and was brought to tears at the mention of his wife, whom he called his "rock" and proclaimed "I love you more than I can put into words or more than any song I could ever write."

In celebration of Biel's 34th birthday, we're listing the five reasons why she's one of our favorite Hollywood moms to date—but let's be honest, we could go on forever.

She Gives Us Mama Bear Goals

On @theskimm Well good morning @JessicaBiel. UpWiththeSkimm #SkimmLife Name: Jessica Biel Job: Mama Bear, actress, producer, wannabe alpinist, consummate student of the @WomanCareGlobal #ThenWhoWill campaign. What time do you get up? It varies but I would say always (2) hours before I’d really like to. How many times do you snooze? I’m not a snoozer. Never have been. Wish I was but I would never get up if I did. I do snooze periodically throughout the day during any sort of boring conversation. Do you snore? I don’t think so. And even if I did, my dog Tina snores so loudly that no one would ever know if I did. Thanks T. 3 things you can't live without in the AM? Yoga. Eating breakfast with my kid. Listening to Erykah Badu while I eat with my kid. We love her. Favorite line from theSkimm recently? “What to say to your niece who just found out about Santa? It’s OK. The Nazi Gold Train isn’t real either. What's your morning drink? Bullet Proof Decaf Coffee. Who do you let speak to you before coffee? Wait... is that an option? Complete the sentence: Woke up like this: Disheveled, running late, doing too many things at once and underperforming all of them; but pretty thrilled about mediocrity! Could be a lot worse, guys. A lot worse.

She Knows How to Do Date Night Right

She Can Make Couture Look Good

Couture has never looked this good next to a toilet. Thank you @marchesafashion for this dynamite gown and @tiffanyandco for the gorgeous jewels. CMA's...here I come.

She's a Good Puppy Mama, Too

Birthday smooch. Thanks everyone for all the good wishes! #tuesdayswithtina 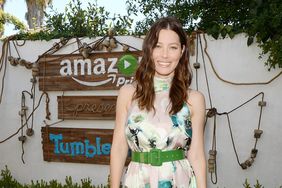 Jessica Biel on Seeing Her Young Son Grow Up: "It's Just Amazing to Watch" 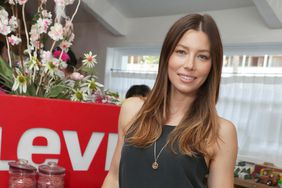