Jennifer Lawrence Says Third X-Men Movie Will Be Her Last

Say it ain't so! Jennifer Lawrence has revealed that the third X-Men film, X-Men: Apocalypse, will be her last turn as Mystique. The actress broke the news to MTV at a screening of her latest film with Bradley Cooper, Serena, in New York City Monday night.

"It's my last one, actually. Yes," the actress said. And although we're sad that we won't see J.Law reprise her role as the shape-shifting Mystique in the film, which is set to hit theaters on May 27, 2016, the actress has no shortage of films coming up: The Hunger Games: Mockingjay – Part 2 will be out in November of this year, while Joy, another film with Cooper, will be out in December. And don't forget It's What I Do: A Photographer's Life of Love and War, the Steven Spielberg-directed story of a photojournalist that was announced earlier this month. It's safe to say that the big screen won't be missing Lawrence anytime soon.

Move Over, Katniss! Jennifer Lawrence Lands an Empowering New Role
Was this page helpful?
Thanks for your feedback!
Tell us why!
Related Articles 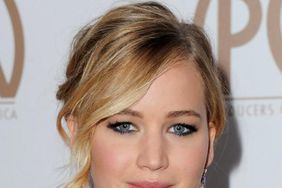