Photographic Evidence That Jennifer Lawrence Is the Biggest Goofball Ever

It's no secret that Jennifer Lawrence has no problem poking a little fun at herself in the name of a good laugh. After all, she was the first to chuckle when she tripped at the Oscars—two years in a row. So it comes as no surprise that on a recent night out in New York City, the Hunger Games actress put on quite the hilarious show for photographers who were up in her grill.

While leaving Nobu restaurant in Manhattan with a group of girlfriends, Lawrence hammed it up for the cameras, making funny faces and at one point even sticking chopsticks in her mouth to impersonate a walrus. The star, who was wearing a white Aritizia dress ($60; us.aritzia.com), Pamela Love necklace, Kenneth Cole bucket bag, and black open-toe booties, proved once again why she's our ultimate celebrity girl crush. Scroll down to see more photos of her funny antics:

How to Get Jennifer Lawrence's New Favorite Summer Handbag
Was this page helpful?
Thanks for your feedback!
Tell us why!
Related Articles 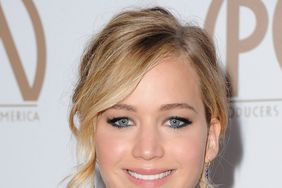 Jennifer Lawrence Makes a Mustache and a Unibrow Look Good While Out in N.Y.C.