With apologies to movie theaters everywhere, here is one more reason to never leave your couch. (Unless it's to grab Milk Duds from the kitchen.) The Hollywood Reporter has announced that Jennifer Aniston and Reese Witherspoon are set to costar in a new television series.

Reese! Jennifer! Together at last! Yep. We're freaking out a little bit.

The series will delve into the world of morning shows, which sounds incredibly juicy. It's also being led by HBO alum Michael Ellenberg, who just launched his own film and TV production company.

Yes, yes. That's all impressive, indeed. But, real quick: WHEN CAN WE SEE IT?

Alas, we'll all have to chill a bit before it's show time. The unnamed series hasn't even hit the marketplace yet. And once it does, it will get shopped around to various networks and streaming services. And then there will probably be a bidding war, and all the rest that goes into these Hollywood power deals.

8 TV Shows You Won't Want to Miss in July

So in the meantime, we'll have to keep ourselves busy by searching for more scoop on the Game of Thrones spin-off. And finding out how to make that just-right popcorn at home. 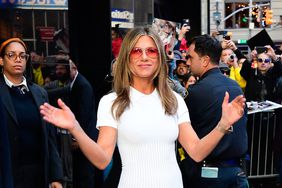