Jennifer Aniston and Justin Theroux Have Tied the Knot

It's official: Jennifer Aniston and Justin Theroux are married! The longtime couple tied the knot on Wednesday at their Bel Air home in front of more than 70 family members and friends, People reports. Celebrity pals including Lisa Kudrow, Chelsea Handler, Jason Bateman, Howard Stern, Samantha Ronson, John Krasinski, Emily Blunt, and more were present for the private pair's "I dos."

Although Aniston and Theroux had met years prior, their romance began to bloom when the two reunited in 2011 on set of the movie Wanderlust, and became engaged in August of 2012.

"I met Justin through Robert Downey Jr. I was on vacation in Kauai with David [Arquette] and Courteney [Cox] and my friend Mandy [Ingber], who's also my yoga teacher. Robert was on the island shooting Tropic Thunder. One night he came over for dinner and brought his friend Justin Theroux. He was the screenwriter on Tropic Thunder. I had never heard of him," the actress said of meeting her beau in InStyle's February 2015 issue. "I remember thinking, Isn't he hot? But he was very hidden. As he says, for him, 'it's winter from the waist down no matter what season it is,' so he was wearing black jeans, combat boots, glasses, and a fedora."

Jennifer Aniston Gushes About Working with Justin Theroux: "He Always Steals the Movie"

And in regards to their wedding, Aniston had this to say: "There's a big discussion in our house right now: Do you just do it and say screw it? Or do you try desperately to get away with [a secret ceremony] where you don't have any fun because you're hiding in a cave somewhere? If we could do it without all the buzzing and the noise ... It can be done. Where there's a will there's a way." It looks their dream of a secret wedding came true, and we're waiting with bated breath for snaps of Aniston's gown. Congrats to the happy couple!

Jennifer Aniston Talks Raising Chickens: "We Eat the Eggs Every Day"
Was this page helpful?
Thanks for your feedback!
Tell us why!
Related Articles 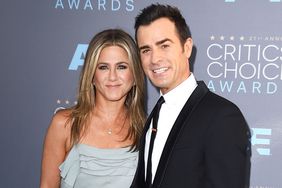 Justin Theroux Shares His Secret to a Strong Marriage with Jennifer Aniston: “It Sounds Simple but It's True" 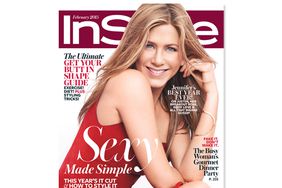