Deciding whether to take your husband's last name when you get married can be a touchy subject for some couples. Many women don't want to lose their maiden name, especially if they're well known professionally, and that was definitely the case for Jenna Dewan Tatum.

Apparently, she never wanted to take her soon-to-be ex-husband Channing Tatum's last name at all, but she decided to because it was important to him.

When Jenna co-hosted Live! With Kelly and Ryan in November, the actress opened up about her hesitancy to tack on Tatum to her name. "Well, it was a little bit of an issue," Jenna told Ryan Seacrest while filling in for Kelly Ripa. "Channing is very traditional. I'm kind of not. My family was very liberal and that wasn't a thing, but to him it was very important."

Though she did include Tatum into her name, Channing was a bit frustrated that she didn't just drop Dewan completely. "He's still kind of miffed that I didn't just take Tatum," she said. "For some reason, it was really hard for me to let go of my given name."

Later on in the opening segment, she offhandedly told Ryan that "relationships are hard." He like the rest of us was confused because prior to the announcement that they were separating after nearly nine years of marriage, they seemed like the perfect couple. "No one is perfect!" And that includes Channing she added.

On Monday, the couple announced that they decided to call it quite in a joint statement. "We fell deeply in love so many years ago and have had a magical journey together. Absolutely nothing has changed about how much we love one another, but love is a beautiful adventure that is taking us on different paths for now," they wrote. "There are no secrets nor salacious events at the root of our decision — just two best-friends realizing it’s time to take some space and help each other live the most joyous, fulfilled lives as possible. We are still a family and will always be loving dedicated parents to Everly."

With their decision to end their marriage, we have a feeling that she'll be dropping the Tatum and going as Jenna Dewan from here on out. 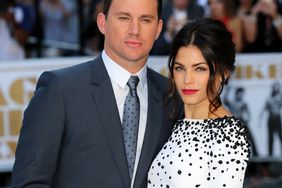