This Oscar Winner Will Portray Hugh Hefner in a Biopic

Just days following the death of Playboy entrepreneur Hugh Hefner, Hollywood’s elite are making moves on a biopic which spotlights his expansive life and empire.

According to producer and director Brett Ratner, the project has been in talks since 2007, but it wasn’t until after he acquired the rights in 2015 that the film landed its Oscar-winning lead: Jared Leto.

"Jared is an old friend," Ratner explained to The Hollywood Reporter in an interview published Tuesday. "When [Jared] heard I got the rights to Hef's story, he told me, 'I want to play him. I want to understand him.' And I really believe Jared can do it. He's one of the great actors of today."

Unfortunately, Leto was never able to meet the late smoking jacket-clad icon, but Ratner doesn’t see that as too great an obstacle. "There's enough footage on Hef out there that Jared will be able to get as much information as he wants," he said.

The Dallas Buyers Club actor has proven himself an immense talent, so we have no doubt he’ll do the role justice—however, it will be quite the departure from the man bun-wearing star’s public persona. 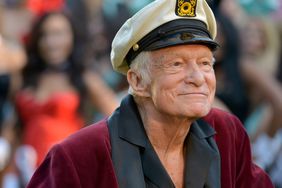