Janet Mock Has an Important Message for Men

When Janet Mock was asked to make her directorial debut on Ryan Murphy's Pose back in March, she was, well, nervous as hell. But, the writer and transgender activist says, "There's no greater kind of joy than facing a fear — and then accomplishing that fear."

On this week's episode of InStyle's radio show, Who Runs the World: Badass Women Special, Mock tells InStyle Editor in Chief Laura Brown that she told Murphy she'd do it — under the condition that he surrounded her with a giant support system of mega-talented collaborators on set to help her create something exceptional. That net was the reason she eventually overcame her fear, went for it, and created her episode, "Love Is the Message," which was met with rave reviews.

She was touched that Murphy did was it took to get her those resources — and thinks more men should take a page out of his book. "I think its really powerful for men to use their power and their privilege to make sure that they're bringing other people in with them," Mock says.

On the fourth and final episode of Badass Women Special, airing today at 1 p.m. ET on Apple Music Beats 1 Radio, Mock is joined by model/actress Hari Nef and One Love Foundation CEO Katie Hood, who are both — in short — about to change the world.

Through One Love, Hood is destigmatizing the conversation around relationship abuse, a cause she got involved in when a friend was murdered by her college boyfriend. It's staggering how common relationship abuse is, she notes, and even more staggering how many people don't know about or recognize it; as a result, too often, women suffer in silence. "It turns out there's a huge demand for this. Some people really want clarity about what healthy and what unhealthy are, and there's a huge gap in providing that to them," Hood says.

Nef, the first transgender model to sign an international modeling contract, knows a thing or two about breaking boundaries too. Learning to feel accepted — and not to feel tokenized — was a process, though. "I really sort of came to a place of control over myself and my mental health and my image and the way I take up space at a point when I decided almost not to speak, to kind of just communicate through my work," she says, describing the power of letting her work speak for itself. "[To] not necessarily have to go up and explain everything or be so performative about the ways that I was giving back and posting it on social media. That was a badass pivot for me."

Visit apple.co/wrtw to listen to the full fourth episode of Who Runs the World: Badass Women Special on Beats 1 on Apple Music. 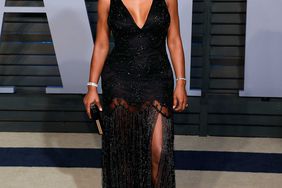