Hilarity ensued during Thursday night's episode of The Late Late Show when Corden took his popular “Take a Break” segment to the Forum in Los Angeles, as it put on this year's star-studded iHeartRadio Jingle Ball concert.

During his temporary gig as the Forum's general manager, Corden goes above and beyond for the venue's headline acts. Playing security guard to Ed Sheeran (code name: gingerbread man), an overeager assistant for Niall Horan, a hype man for Demi Lovato, a vocal coach for Sam Smith, and an annoying TV operator for Liam Payne, the laughs just keep coming.

Clad in a mesh midriff-baring ensemble, the overweight father of two barges into Swift's lounge area. "I'm ready. Use me," he tells the pop star, motioning to his body. To his credit, Corden nails the choreography to “Look What You Made Me Do,” but his awkward pre-performance huddle and determination to sing along with Swift aren't exactly what she's looking for in her entourage. Full points for enthusiasm, though!

Watch the hilarious clip above (Swift's portion comes on around the 10:08 mark), and catch The Late Late Show nightly at 12:37 a.m. ET/PT. 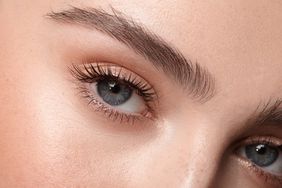 Gels and Pencils Can Actually Wreak Havoc on Your Brows, So Use This Hero Product Instead