Confirmed: Jaden Smith Loves to Jump, Sing, and Dance in His Batman Costume

The day has arrived: Jaden Smith created a video to his new track, “Batman,” dressed as Batman.

Our story could quite honestly end there, but let’s explore the nearly 5-minute piece of work. Just like any great music video begins (see Lady Gaga’s “G.U.Y.”), our protagonist finds himself waking up in the middle of a field in what looks like Los Angeles. “I’ll be there in 20 minutes,” he mysteriously tells someone on the other end of the phone.

Seconds later, now sitting at home, he hangs up on an anonymous caller asking him to address rumors speculating he is in fact Batman. Jaden, or Batman, takes a marker and writes “Batman” on glass. BOOM. Then, as the song commences, scenes of him working out shirtless and walking out of a party flash back and forth. Finally, we see the star step out of what appears to be a White 2016 Tesla Model X (environment, FTW!) in what we’ve all been waiting for: his all-white take on the classic Batman costume.

The rest looks like any other rapper’s music video. There’s drinking. There’s confusion. There’s repetition of one word that we know for a fact we won’t be able to get out of our heads: Batman. Batman. Batman. Batman. It's a little NSFW, even. At one point, he poses in his costume on the Hollywood Walk of Fame and gets into a fight with a Batman dressed in the traditional black look. Luckily, Spiderman steps in to help.

It’s trippy. It’s funny. And we’re really into it. But what’s up with his love for the superhero? Will and Jada Pinkett Smith’s 18-year-old son dressed up in a white Batman costume at Kim Kardashian and Kanye West’s wedding.

He also reportedly wore the look to his prom. “I wore the Batman suit to heighten my experience at the wedding and prom which was fun, but also at the wedding I felt as though I needed to protect everyone there and needed to have the proper gear to do so,” he told GQ in 2015.

Watch the full “Batman” video above. 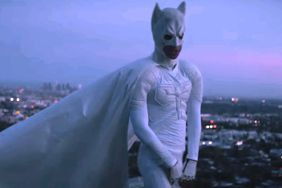 All the Questions I Have About Jaden Smith's "Batman" Video