This Is What Ivanka Trump Wore to the Congressional Baseball Game

This week Ivanka Trump attended a baseball game in Washington, D.C., but opted for a decidedly more formal look than the usual ballpark fare.

With her children in tow, the First Daughter watched the annual congressional baseball game at Nationals Park on Thursday. For the sports session, which raised money for three local D.C. charities, Trump wore a white A-line dress with a scalloped neckline. She paired the piece with a pair of pink ankle-strap ballet flats and cat-eye sunglasses.

The charity baseball game pitted Democrats against Republicans, per tradition, and has existed since 1909 to raise money for Washington-area charities. This year's game took on renewed importance because of a shooting earlier this week at the baseball practice for GOP House members in Virginia.

House members united to play ball and fundraise, and succeeded by selling 24,959 tickets—the most ever in the event's 100+ year history. The Washington Nationals even had to create additional seating in the stadium to accommodate the demand for tickets.

The game ended up raising more than $1 million for Congressional Sports for Charity. Last year, it raised about $500,000 according to CNN.

Remember When Ivanka Trump Made a Gossip Girl Cameo?

At this year's game, the Democrats defeated the Republicans 11 to 2, but both sides came out winners. 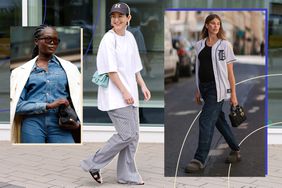 18 Outfit Ideas to Wear to a Baseball Game