In the midst of the Democratic primary season, Ivanka Trump has new look. On Feb. 12, the White House Senior Advisor showed up to the anniversary of her Women's Global Development Prosperity Initiative in Washington, D.C. with some (very new for her) chunky blonde highlights.

Since her father President Donald Trump entered the White House three years ago, Ivanka has dyed her hair blonder and blonder. She started off with honey blonde hair on Inauguration Day, gradually going lighter until she went full-on platinum blonde in 2019.

Kyle White, a celebrity colorist at Oscar Blandi salon who once worked with the First Daughter (White does not currently color her hair), previously told InStyle that her color change could be a power move. "The blonde, blonder, blondest progression of Ivanka’s hair color is not an uncommon one," he said. White pointed out that he's witnessed clients subtly go cooler as they ascend to power. Also, he noted that Carolyn Bessette-Kennedy went platinum when she married John Kennedy Jr.

What Are All of Ivanka Trump's Sudden Hair Changes Trying to Tell Us?

Along with her hair color, Ivanka has also experimented with her haircut. Ahead of her September 2019 South America trip, she cut off all of her hair into a trendy shoulder-length blunt bob. In the following days, she was seen visiting a migrant shelter in La Parada, Colombia with a messy low bun (likely created with extensions), and then a bob again.

When InStyle reached out to Stacy Jones, founder and CEO of Hollywood Branded, an influencer and entertainment marketing agency in Los Angeles (she does not work with the Trumps), to comment on Ivanka's sudden hair changes, she said the style switch ups could be her way of taking control of her brand and how she's physically perceived while meeting with global leaders.

VIDEO: Melania Trump Continues to Send Messages Through Her Clothes

"Her hair plays a major role in this, as Ivanka’s new shorter bob haircut is more business-like and professional," Jones said. "The new style is an attempt to showcase that she is attempting to truly transition into a role which requires sophistication in dealing with world leaders on the global stage."

The verdict is out as for the meaning behind Ivanka's new highlights. However, major hair changes often coincide with major life events, whether it's a birthday, wedding, or getting a new job.

In recent months, rumors have circulated that Ivanka might leave her post at the White House if her father is re-elected for a second term. While the administration has yet to adress these rumors, Ivanka recently declined to echo her father's criticism of climate activist Greta Thunberg, and her appearance at CES, a major tech confrence drew major criticism. Her involvement in a conference on human trafficking hosted by the Trump administration was also boycotted by many activists.

The verdict is out as to whether Ivanka's new highlights are foreshadowing a big professional change to come. Maybe, like the rest of us, she's just majorly nostalgic for the '90s. 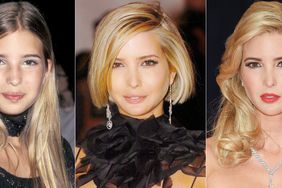