By Alexandra Whittaker
Olivia Bahou
Olivia Bahou
Olivia Solomon is a New York-based writer and editor who covers all things fashion, lifestyle, celebrity, and pop culture. She was previously the Assistant Digital Editor for InStyle, and her work has appeared in many national publications.
InStyle's editorial guidelines

Kensington Palace has shared select few details about Kate Middleton and Prince William’s third child, revealing only that the baby is due sometime in April, but it seems that Middleton’s due date has approached. According to a release from Kensington Palace early Monday morning, Kate Middleton is in the hospital ready to give birth right this very minute.

The exciting news comes just one day after Queen Elizabeth's 92nd birthday, which she celebrated with a concert on Saturday night. Understandably, Kate Middleton was absent from the festivities. Even though the new baby will not be born on Queen Elizabeth's birthday, his or her birthday could still be a holiday, since Monday is St. George’s Day.

Royal baby watchers are going crazy with anticipation, and a few clues have tipped them off that Middleton has been ready to have baby no. 3. The most notable hint is that she hasn’t been seen since an Easter Sunday church service on April 1, her last public appearance before maternity leave.

Fans have flooded Twitter with theories about the third royal baby, including its name and sex. For the record, the bookies are betting on Middleton having a girl named Mary or a boy named Arthur, according to BBC News, but no one other than Middleton and Prince William can say for sure. 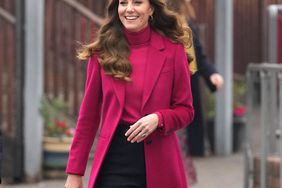