The attendees of the 73rd annual Golden Globes didn’t stop partying after The Revenant took home the best drama motion picture award—that’s when they really got started. Their first stop: The InStyle & Warner Bros. official after-party, located just steps away from the awards ceremony at the Beverly Hilton Hotel.

Kate Hudson, Transparent’s Jeffrey Tambor, American Horror Story’s Angela Bassett, and Spotlight’s Michael Keaton were among the first in the door, which led to a massive tented pop-up space in the hotel. The theme of the night was supreme Asian opulence, and Thomas Ford of Tom Ford Designs implemented it in every detail, from the walls evocative of bamboo forests to the central focal point of the room, a large hand-made chandelier made of 5,000 brass pieces.

Within minutes, many of the night’s winners filtered in with Globes in hand, including Brie Larson, Sylvester Stallone, Christian Slater, and the cast of Mr. Robot. Sam Smith, who won for best original song, was so happy about his new hardware that he actually walked through the door using his trophy as a microphone while shouting lyrics he made up on the spot.

InStyle Editorial Director Ariel Foxman congratulated Room star Brie Larson on her Best Actress in a Motion Picture, Drama award. The Golden Globe winner shimmered in a custom Calvin Klein gown, which she described as "the most gorgeous dress I could have ever imagined."

After having her Stella McCartney train stepped on before her acceptance speech, Empire’s Taraji P. Henson made a quick change into an easier-to-wear boudoir-inspired Stella McCartney gown for the after-party. The shoes came off next—she pulled her whole girl squad over to the L'Oréal​ Rollasole station, where she picked up a pair of gold flats. Then she hit the party to show off her hottest gold accessory, her Globe, to Eva Longoria, Michael B. Jordan, and more. “I don’t think it’s going to sink in until tomorrow,” she said. Jennifer Lopez also changed from Giambattista Valli to a white cap-sleeve design. “I wanted to wear something comfortable because people kept stepping on my train!” she said.

Meanwhile, Selena Gomez held court in a corner with Charlie Puth. “It’s nice to look at all the hot guys, I’m not going to lie,” she joked. And there were plenty in sight—Chris Evans, Nicholas Hoult, Orlando Bloom, and Jack Falahee among them. Mr. POTUS, aka Tony Goldwyn of Scandal, was also there, happily chowing on steak, which he said was “delicious.”

The dance floor was also hot thanks to DJ Michelle Pesce’s mix of oldies and new hits, from Michael Jackson’s “Take Me Back” to Drake’s “Hotline Bling.” Everyone was busting a move, including Gabrielle Union, Vanessa Hudgens, and Bella Thorne. The famously rhythmic Tatums, Channing and Jenna Dewan, were no strangers to the dance floor, and this time they pulled in Crazy Ex-Girlfriend winner Rachel Bloom (and her Globe) into their circle.

After taking 10 minutes worth of selfies on the red carpet at the InStyle & Warner Bros. official after-party, Kourtney Kardashian caught up with Jennifer Lopez and Casper Smart. Lopez had just changed out of her Giambattista Valli gown and into a white cap-sleeve design. “I wanted to wear something comfortable because people kept stepping on my train!” she said.

Kylie Jenner and Kourtney Kardashian swept in—after taking 10 minutes worth of selfies near the red carpet—and caught up with Jennifer Lopez, while Rosie Huntington-Whiteley and Jason Statham celebrated their new engagement. Amy Adams met the teeny Room star Jacob Tremblay. “I’m so happy I got to see him, because that was my favorite performance this year,” she said.

L'Oréal​ set up a photo booth in the cocktail area where stars took animated snaps, and there was also a virtual reality area, where stars like Bella Thorne tested the newest technology. Plus, the late arrivals of Gael García Bernal​ and Bryce Dallas Howard kept the soirée going and the bubbly pouring all night. “This party always has the best dancing, the best music, the best people,” said Scandal’s Bellamy Young. “It’s just the best.”

Click through the gallery to see more of the InStyle & Warner Bros. official after-party, plus photos from the rest of the weekend's hottest parties.

—With reporting by Brianna King and Brandi Fowler 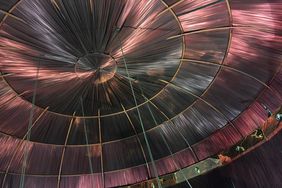 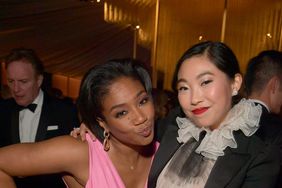 Star-Studded: The Best Parties This Week
Miss Golden Globe 2016, Corinne Foxx, on Her Unforgettable Night: "All the Presenters Were So Nice to Me"